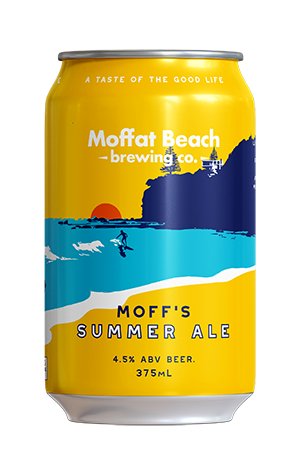 You’d think a beer that could take out Grand Champion Beer at the 2020 Indies awards must have it easy. But have some sympathy for Moff’s Summer Ale; it doesn’t fit neatly into a standard style for competition guidelines.

Is it an Australian pale ale? No, it doesn’t quite fit the bill; while there’s passionfruit and mango, there’s also a solid dose of heady honeydew and resin American hop characters shining through that keep it from fitting in here.

So is it an American pale ale? No, it’s designed to be light and refreshing for the Sunshine Coast climate, so even though it carries some of that classic bitterness, at 4.5 percent ABV it doesn’t hit the criteria for a US pale.

Since there’s so much vibrant hop aroma and flavour going on, it eventually found its place in competitions as a ‘session IPA’… but outside of awards, MBBC just calls it a summer ale. They pair it with chilli salted squid, but it goes equally well with salty hot chips and sandy feet. (Note: eat the chips, not the feet.)