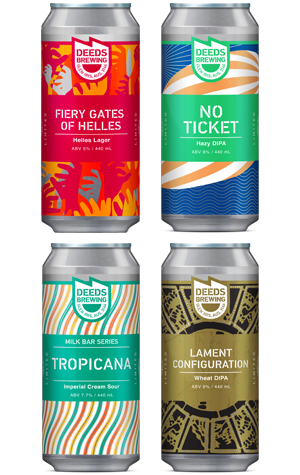 Ask a Deeds fan what sort of beers they enjoy most from the Glen Iris brewery and I doubt you'd find many going with "their classic lagers". Yet of their final quintet of specialties in 2020 it was their Czech style pilsner Na Zdravi I enjoyed the most. Here, they return to lager with Fiery Gates Of Helles, but hop across the border to seek inspiration from Munich helles, and again it's a move they carry off with a clarity like the pale gold liquid that pours from the cans. Soft floral hop aromas, light cracker malts and fruity esters meet you first, while a drying, earthy, straw like bitterness rises to meet the more biscuity sweetness that builds as it warms.

Hazy DIPA No Ticket acts as a test of sorts: I picked mine up and was transported instantly to the punchline delivered by Harrison Ford in what should have been his last appearance as Indiana Jones; I suspect many of a younger age will wonder just what the hell Deeds and I are on about... That said, I'm not sure what the connection is between the film and the beer; what I can say is the murky yellow hazy's aroma is potent as anything, with Simcoe, El Dorado, Azacca and Azacca Cryo hops creating something reminiscent of more classic US hops: some pine, pineapple, and sweet, grapefruity citrus. As with many beers of this ilk, there's plenty of initial sweetness but here there’s also enough faintly grippy bitterness to reign it in.

Their Milk Bar Series is also back, this time as Tropicana, brewed with pineapple, lime, coconut, cinnamon, nutmeg, vanilla, and lactose, plus Mosaic and Sabro hops. It smells like tropical punch, with pineapple juice, coconut and a hint of cucumber (seriously, both me and my sampling companion suggested it) leading the way on the nose. As you might expect from such a concoction, one weighing in at 7.7 percent ABV, it's a pretty sticky, sweet 'n' creamy affair across the palate – it is supposed to be reminiscent of milk bar counter treats, after all – with a bit of warming booze late on – which sets it apart from said milk bar counter treats.

Leaving the biggest til last and you have Lament Configuration, a wheat DIPA brewed with 50 percent wheat and a hefty dose of oats. As well as making you feel for the person who had to get such a brew through the Deeds brewhouse, it's so thick you might suspect lactose is at play (it's not). And, despite the 25 grams per litre of hops, they don't get much of a look in as that rare grain bill muscles its way to the foreground of a sweet, dank, boozy drop with a hint of toffee bananas.

All of which makes for a very Deeds quartet, skipping from Munich beer halls to Nazis on a Zeppelin, the milk bar of your childhood, and a beer so dense you could try standing a spoon in it.