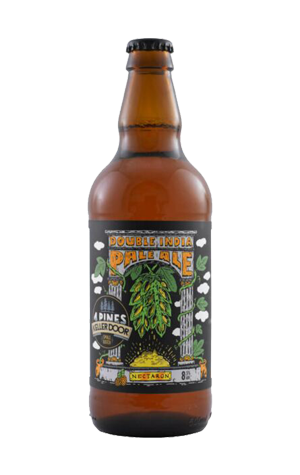 4 Pines have released some wonderful Keller Door beers over the years, and this DIPA featuring Nectaron hops is up there with the best of them. Spruiked for its pungent aroma of ripe stonefruit and tropical fruits, Nectaron is a hop variety launched by NZ Hops in 2020 (apparently its previous name, HORT 4337, wasn’t catchy enough). It certainly brings peach and nectarine to this DIPA, in enough concentration you’d swear you left a box of them in the car on a hot day.

But there’s also big grapefruit and orange peel energy, like someone’s squirted a sliver of zest in your face and the oils have settled on your skin and seeped into your nose. There’s just enough alcohol warmth to make you wonder if said citrus peel had previously served as the garnish in a strong cocktail. I can’t help but feel you could reduce this beer into a syrup, pour it over a cake, and win the approval of everyone at the dinner table.

The hop variety Nectaron is named for "nectar of the gods", and between the heavy golden fruitiness of this DIPA and the ancient temple on the label, it’s not hard to imagine Indiana Jones swiping a bottle and running off.