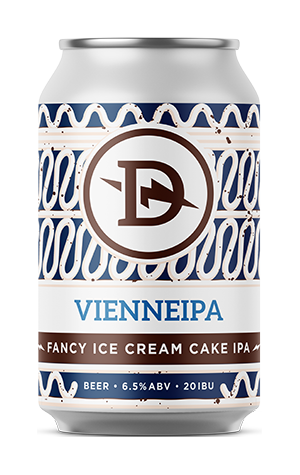 Is there anything on Earth fancier than a Viennetta cake? Most things, probably. Yet, as someone who grew up in the 90s [Or in the UK in the 80s – Editor], there’s something particularly alluring about a beer built to replicate the ice cream cake that appeared at so many birthday parties [Or dinner parties in the UK in the 80s! – Editor], often billed as being a little bit fancy despite being a rock hard slab of pale vanilla you’d pull from the freezer five minutes before serving. McDonald’s might be the masters of selling burgers that don’t look anything like the ads but, when it comes to cakes, Viennetta was the master. It likely remains the master, too, but I'm not in a hurry to buy one.

It's a trip down Memory Lane that brings us to Dainton’s Vienneipa, which the brewery has dubbed a “Fancy Ice Cream Cake IPA”. Like opening a packet of the cake itself, I really wasn’t sure which way the colour would go as I cracked the can: would they make a beer as ghostly white as could be?

However, it looks rather similar to any hazy IPA, albeit with a particularly thick appearance. It retains some of the juicier hop notes from many hazies too, with light mango and papaya appearing as the vanilla and chocolate swirl. Impressively, Dainton have really captured the character of chocolate you’ll find atop a Viennetta, with my first thought being to check the glass again to make sure it wasn’t filled with actual powdered cocoa.

The overall experience of drinking the beer is probably best left to the Viennetta reviewers on Woolworth's online store: "A great alternative to cake and a simple crowd-pleasing dessert."

Or alternatively: "Yum yum in my tum tum lol."