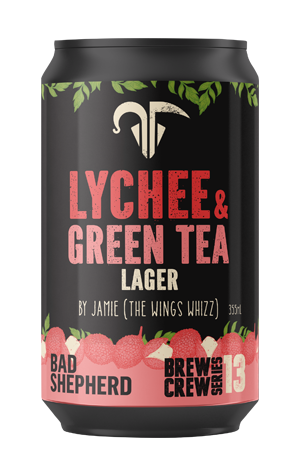 The past few years have seen a steady resurgence of lagers within the craft beer landscape. Some brewers have opted for macro-mimicking Aussie styles to sate more mainstream drinkers, others have looked to hone versions of classics such as Munich's helles and Bohemian pilsners, and then there are those with a New World twist. Then there's the thirteenth entry in the oft-colourful Brew Crew Series from Bad Shepherd; as Dorothy might say if she was a Northern European lager-drinking purist, we're not in Kansas anymore...

This time around, the Cheltenham crew handed the design brief to a member of their kitchen staff: Jamie, their "bubble-tea-loving, kitchen whizz" who took inspiration from her home county of Yilan in Taiwan. Both lychees and green tea grow there, and both now take root in this very bright, pale golden lager. For me, the unique herbal, drying character of the green tea is the star here with the lychee more a gentle embellishment both on the nose and around the fringes of the flavour. It feels as if the tea is responsible for what bitterness there is too – tannic rather than hop derived – in a unique drink you can see pairing well with dishes from Jamie's home.