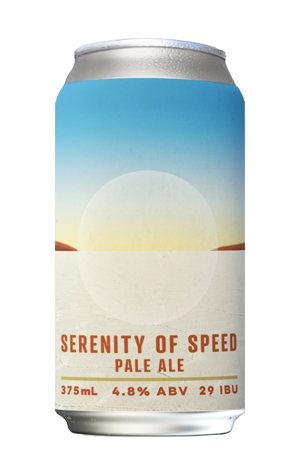 This week, the owners of Prancing Pony Brewery, their friends, and scores of other racers are gathered at Lake Gairdner for Speed Week, at which Corinna Steeb will be attempting to beat her own land speed record – which you can read about here. Prior to heading to the salt lake, they'd brewed a beer referencing a comment by one of their fellow racers – one featuring salt from Lake Gairdner they'd collected on a previous visit. We're told interest in pre-sales was so strong, this first batch has pretty much been allocated, but also that they'll be bringing back some more salt from this trip to do it again.

The beer created in honour of their passion is Serenity Of Speed, tagged a pale ale but also sharing some characteristics with a Belgian witbier. The soft, rounded aromas of lemon citrus and gently spicy esters ensure the beer stands apart from most pales on the market, although the crisp and dry finish brings it back into modern Aussie pale territory. So, will it be used to toast a new land speed record...?

Style
Pale Ale with A Pinch Of Salt
ABV
4.8%