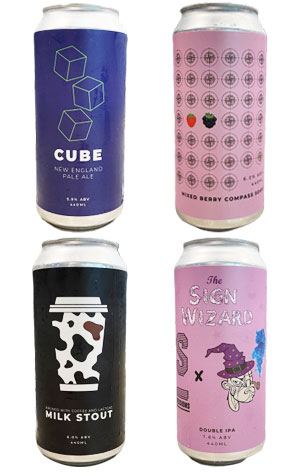 There must have been some busy days on the canning line at Braeside Brewing in recent weeks with no less than four limited releases leaving their brewpub in quick succession. Starting with hops, as many like to, and you have Cube, a New England pale ale in which they've combined kveik and English ale yeast strains with Mosaic, Lotus and Bravo hops and taken the booze content close to 6 percent. It's an approach that serves up plenty of sweet, juicy fruit gum aromas and flavours with a grassy edge, a thick and rounded texture, a touch of bready malt sweetness, and little in the way bitterness.

Mixed Berry Compass Sour follows a rather unusual Peach entry in the series and lands much more where you'd expect from such a beer. It looks like guava juice (albeit with a head), while a yoghurt-esque creaminess is shot through with plenty of sweetness from the blackberries and strawberries, which also add to its bracing tartness. Imagine a fruit smoothie in beer form and you're there.

There' coffee from Rubia Roasters in Milk Stout, but the specialty malts and dash of lactose ensure the beer lands closer to mocha than espresso, with the coffee character matched by much in the way of chocolate, so much so you could equally be tucking into a choc fudge milkshake swirled with a shot of coffee.

Boozy soft drinks covered, it's back to hops for the finale, a three-way collab with Sessions Sandringham and Anchor Signs Australia. That said, while Sign Wizard's label says this double IPA is all about the hops, the dense wall of specialty malts hits just as hard. The Citra, Amarillo and Chinook add a gnarly, drying, liquorice-tinged bitterness to the toffee-meets-treacle chewiness wrapping itself around your palate. It's very much reminiscent of the days when such IPAs were about mouthfuls of rich malts and big bitterness – remember Jamieson's Beast? – rather than the stripped-back, low IBU fruit explosions of today.