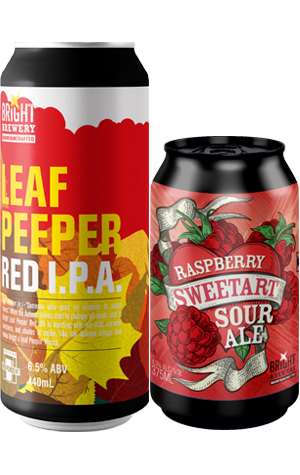 There's not really a bad time to visit the Victorian High Country, but we're sure plenty would pick autumn as the finest. It's a stunning enough region as it is, but when many of the trees start turning shades of red, orange and yellow it's like a new postcard scene every time you turn a corner.

In the beer world, you can generally tell when autumn is here by the arrival of a wave red IPAs. So, when you've got autumn and a brewery in the heart of the High Country, it can only mean one thing...

Say hello to Leaf Pepper, tagged a red IPA but more the autumnal amber of the leaves on the can it pours from and, indeed, I'd argue more an American amber than a red IPA. If you've enjoyed their Red XPA (which, if you've had one, you have), imagine a drier, more toasted version: there's no extravagant hop explosion, but there is a tight blend of burnt toffee brittle, a hint of cacao, and a good bitterness with an earthy edge that brings to mind Riverside's 44, once a cult fave in Sydney circles.

With their Raspberry Sweetart, it's a step beyond red to violent crimson. Whereas I've found some past entries in the series a little cordial like and sweet, here there’s more of a balance towards sour, reminiscent of the experience of biting into a slightly underripe berry. The lacto’s creamy funk is there in the aroma too, while there’s a kind of natural earthiness to the fruit character of a beer that ticks the boxes marked "tart" and "quenching".