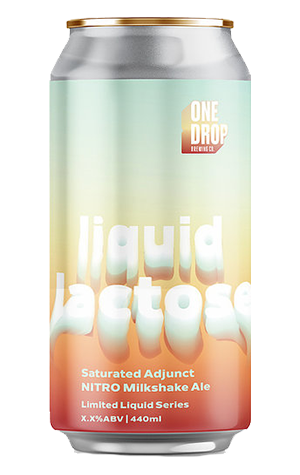 In fact, I’m not convinced that it is beer. It looks like beer – nice golden body with a creamy white head. And, apparently, it’s made with beer ingredients. But I can’t taste hop or malt or yeast characters. Not one iota. No bitterness. No fruit or resin or toffee or caramel or banana or spice.

Of course, One Drop Brewing claims that this is a beer from their Liquid series, which has a “pure, unadulterated focus on complete saturation” and uses “every lactose product and process available to brewers right now”. They claim this is a milkshake ale with lactose from the Bega Valley and vanilla and nitro. In fact, they’ve been experimenting with adjuncts in beer since the day they opened, and the pancake-cheesecake-mudcake-vanilla-pastry-caramel-maple-chocolate-marshmallow-syrup beers they’ve made up to this point could even be used as evidence that this, too, is a beer.

But they’re lying. It’s the alchemist thing. This is melted vanilla ice cream.