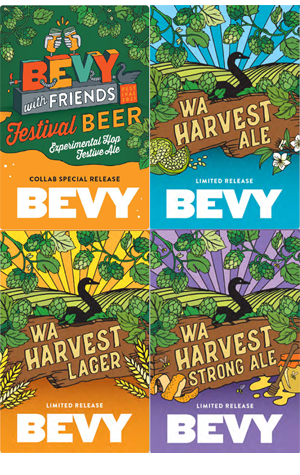 The Bevy With Friends festival gathered the gang from last year’s debut on the precipice of lockdown for a celebration of local connection and ingredients. Hosted by Bevy head brewer Andy Scade, the troupe of local breweries and distilleries contributed to one of this new quartet, while the Burswood team worked with suppliers around the state for another three, all the while trying to minimise the food miles with each release.

Festival Beer
In what may be its first WA outing, HPA-033 imparts guava, pine and a little dank / resin swagger to a very sessionable beer, the kind you’d want to share with some mates at a party, especially if that party happened to be at The Camfield, and your mates happened to be a bunch of local brewers and distillers.

WA Harvest Ale
Spoiler alert: Harvest Ale’s secret ingredients are up for speculation, so if you’d rather a surprise and a chance for a private tasting with Andy, maybe skip ahead to the Lager. If not, you can expect lemon myrtle and finger lime pushing native citrus tones, with the addition of cooked Southern forest wildflower honey for colour and subtle complexity, layered with citrusy Preston Valley Cascade hops.

WA Harvest Lager
The palest of straw – possibly the lightest coloured beer I’ve ever seen, in fact, and using only West Australian Joe White pale malt barley and Preston Valley Victoria hops – a once-abandoned sibling of Galaxy brought back by some of the country's micro-hop farms – Harvest Lager is a clean, crisp quencher which implies another iconic Swan-referencing beverage.

WA Harvest Strong Ale
Pouring with a golden opacity, Harvest Strong is the most complex of the quartet. Its Belgian inspiration is evident in fruity / spicy esters, while Geraldton Wax floral tones, Preston Valley Flinders hops, Southern forest honey, and lemon peel have their own influence, some of which is an unexpected dryness and bitterness.