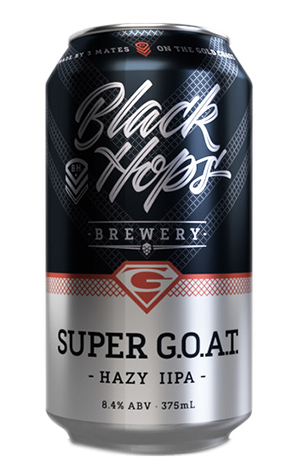 When you release a hazy IPA called the Greatest Of All Time, how do you top it? For Black Hops, the answer is dialling up the booze and tropical flavours to create Super G.O.A.T. First brewed as a small taproom release right at the end of 2020, Black Hops let the beer roam a little wider for March 2021; a fitting time, given its just a couple of months after the core range G.O.A.T. made it to number five in the GABS Hottest 100.

The big version of their top-selling beer even looks like a far bigger beast, pouring from the glass with a thick and almost pulp-like orange appearance. There’s a slight smell of booze from the aroma but drink the rather thick 8.4 percent ABV beer down and you’ll find it’s clean notes of freshly-squeezed orange juice, gooseberry, guava, mango and a biting bitterness on the finish.