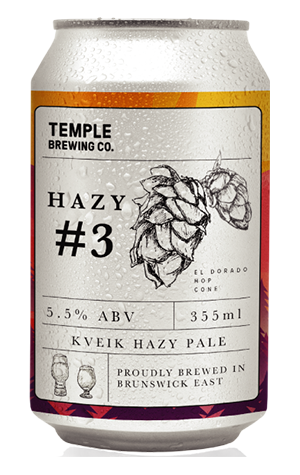 Given number two was bigger than number one in the first two beers in Temple Brewing's Hazy Series, we were working on the assumption that number three might dial things up a little further. Instead, Hazy #3 is the lightest yet released in a series of four with brewer Ross creating a rather sessionable hazy pale and looking to see how Motueka, Cryo Citra and El Dorado hops interact with kveik yeast.

Cracking it, the first notes to come forward are lemon rind meets orange, while they're joined by yellow nectarine and a tropical medley of lychee and pineapple. As well as contributing to those fruity notes, the kveik yeast seems to add a slight tang but it’s worlds removed from a kettle sour and far closer to drinking breakfast juice a few hours on from brushing your teeth.