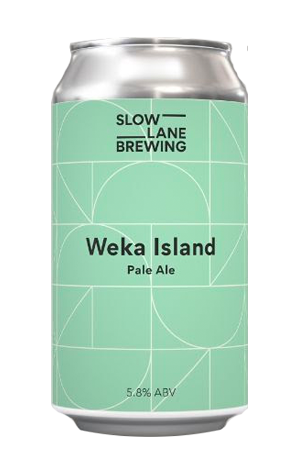 Weka Island is a 5.8 percent ABV hazy pale ale from Slow Lane and also a tiny island off the coast of another small island which is off the coast of the island nation of Aotearoa. Got it? I’ll get to the beer shortly but first I’m going to write a totally unnecessary and barely relevant bit about our national neighbour and its birds.

Weka Island is located off the east coast of Rakiura, an island that sits south of the southern most point of the south island of Aotearoa. Rakiura and the islands that surround it are critically important habitats for some of Aotearoa’s most iconic and endangered bird species. On island nations, birds fill many of the ecological niches that would otherwise have been filled by mammals so Aotearoa is positively heaving with unique feathered friends. Or at least it was, until humans turned up with their mighty hunger, need for feather-based fashion, and penchant for introducing small predatory mammals to places that would rather not have them.

Anyway, thanks to the effort of the locals and government bodies, most of the islands surrounding Rakirua are free of rats, cats, possums, stoats, pigs and the like so they make ideal sanctuaries for the many unique and wonderful bird species that are either critically endangered or completely absent from the main islands of Aotearoa where they used to proliferate. One of these species is the Weka, a flightless rail about the size of a chook. So that brings us back to the actual matter at hand: this fine pale ale.

Weka Island is brewed with pilsner, wheat and oats, hopped entirely with Motueka, and open fermented with the Verdant IPA yeast strain. Motueka is notorious for producing lime citrus and stonefruit and here it comes across almost like a lemon/lime meringue aroma with grapefruit. There’s also this distinct earthy apricot yeast ester hanging around, and I’m into it. The lime continues on the palate with a bit of mint, grain and spicy bitterness that lingers long after. Like its namesake, this is a unique pale ale that will absolutely be hunted to the brink of extinction for being so delicious.