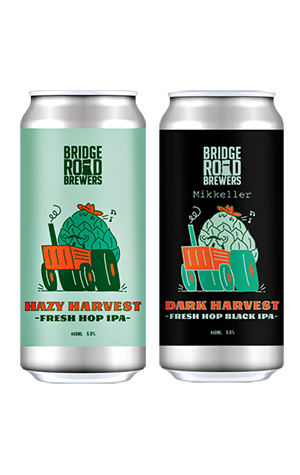 Snap lockdowns aside, March 2021 is starting to feel a whole lot more normal than 2020. For one, beer festivals are back, including The High Country Hop which not only returned at the end of the month but was bigger than ever, having moved from the carpark at Bridge Road Brewers to the Beechworth Historic Precinct Reserve. The festival’s return also heralds the arrival of Bridge Road’s longrunning fresh hop beers, which have been brewed for far longer than other breweries have been exploring how fresh hops differ from pellets.

That doesn’t mean there aren’t changes though; in keeping with the times, this year the IPA has become Hazy Harvest. Asides from that fact, the annual beer is otherwise quite similar to 2020’s with it again being 6 percent ABV and brewed with fresh Galaxy hops picked just six hours before being added to the beer. Galaxy might be best-known for the passionfruit flavour it imparts but here the fresh cones create what reminded me more of a citrus, even mandarin tang, to the point where I’d assumed the brewers had used Hop Product Australia’s more recently developed Eclipse hop. Asides from that distinct but difficult-to-describe juicy note, there’s also sweet honeydew and peach notes in a hazy beer that’s still quite light and dry on the palate.

Since 2012, that pale beer has also been released alongside Dark Harvest, a fresh hop Black IPA Bridge Road’s founder Ben Kraus first brewed with Mikkeller in 2012. As in previous years, 2021’s retains the same layered malt base while like with Hazy Harvest, it’s entirely hopped with Galaxy. Here the blend of specialty malts adds a rich mix of chocolate, freshly roasted coffee beans and tobacco with the wet hops bringing more orange, herbal and stonefruit notes.