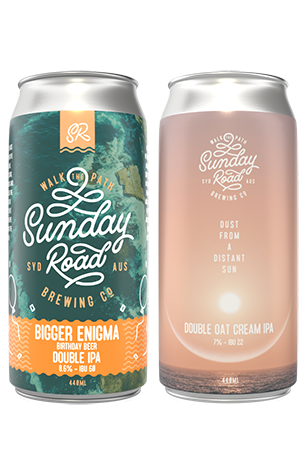 Between the clarity, the craftsmanship, and the awe-inspiring beauty, Bigger Enigma is what I imagine stained glass windows taste like.

Sunday Road have hit five years of brewing, and this beer is how they’re celebrating. Since Enigma Ale was the brewery's first to market and remains their flagship, it’s only right for it to become the basis for their birthday beer with Bigger Enigma turning things up by containing twice the malt, twice the bitterness and four times the dry-hop of the original. You can smell the thick malt sweetness as it brings a thwack of ripe pawpaw and sharp grapefruit peel to the nose, along with a candy character and a bit of resin. But once this beer passes your lips it becomes all about the resin, flowing thickly into your mouth until it’s filled your whole face. A slow stratification of bitterness gives this beer the gravity it deserves, leaving behind a distinct imprint of this work of art.

Dust From A Distant Sun might be a double oat cream IPA but don't confuse it with an overly-sweet milkshake IPA. Having partnered with the ingredients suppliers Bintani Australia for the beer, there's a prominence given to the malt used rather than lactose overpowering everything else. Bintani supplied their current Victorian crop of Joe White Signature Ale Malt and Sunday Road's head brewer Mick O’Rance paired this with malted and flaked oats, a mix of New Zealand and Australian hops - Nelson Sauvin, NZ-107, and Galaxy - and a little lactose. The final touch was a gorgeous artistic label whose delicate colour gradients hint at the nuance within this beer. A juicy body and an impossibly creamy head release a perfume of stonefruits, mango and a hint of vanilla. In the mouth, the oats and lactose bring a sleekness, but this isn’t a beer that coats the tongue; it’s more about a balancing sweetness that smoothly carries the hops to each corner of your mouth, before leaving a touch of bitterness towards the end of the mouthful.