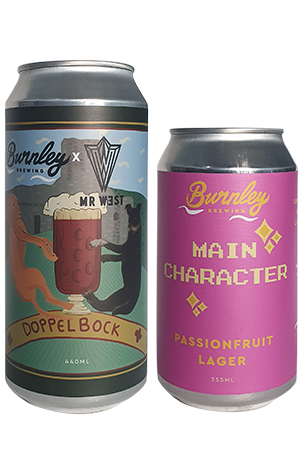 It’s not all that often a locally brewed doppelbock is released and, while Burnley Brewing make them more often than most, theirs isn’t normally brewed until their Richmond brewpub is preparing to transform into Bavaria for a celebration of all things Oktoberfest. But there’s a good reason Burnley have brewed Doppelbock early in 2021: it’s to celebrate dogs.

Two dogs in particular – the beer is a collaboration with Mr West and the can's artwork features both Burnley's brew dog Harry and the Footscray bar and bottleshop's office dog Gretel. The can design was by local artist Lily Suwitra and takes its cues from the legendary German brewery Ayinger, and the beer inside draws heavily on tradition too. The richly copper-coloured strong lager has delicate herbal notes from the use of Hallertau Tradition and Saaz hops, while the malts provide biscuity, caramel and cola flavours against a very slight boozy heat and clean, dry and bitter finish.

From traditional lagers to modern craft ones, Burnley have also released the third in their fruited lagers series. Following on from one featuring mango, pineapple and peach, Main Character makes passionfruit the ... um ... the main character and, like its predecessors, the fruit is only present with the lightest of touches. But, while it might be a soft note of passionfruit in what's otherwise a very classic lager, the fruit is captured in Main Character well, with a gentle tartness joining more juicy and fleshy elements as though you're grabbing the fruit straight from the vine.