Beer Moon Dog Breaker Of Chains & Watcher On The Wall 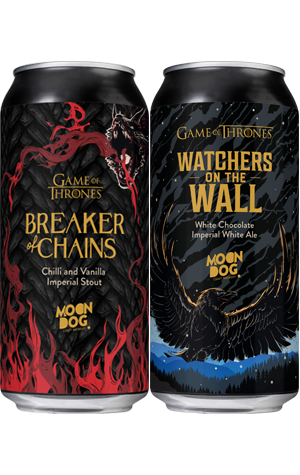 Not content with having a lagoon at their brewery venue in Preston, Moon Dog installed the throne from Game of Thrones at Moon Dog World as part of the show's tenth anniversary celebrations. If you're a fan of the show (or at least its first seven series) and can't make it along for a happy snap, you can enjoy the other element of the official partnership at home via two beers – both imperial, of course.

Breaker Of Chains, so called presumably because "Daenerys Stormborn of the House Targaryen, First of Her Name, the Unburnt, Queen of the Andals and the First Men, Khaleesi of the Great Grass Sea, Breaker of Chains, and Mother of Dragons" doesn't fit on a 440ml can, is a chilli and vanilla imperial stout. Unless you're one of the very few people who actually enjoys the fiery chilli beers still brewed by a number of local breweries – beyond the dare stage, at least – then you'll be relieved to hear this is more like one of those fancy chocolate bars with a hint of chilli. The vanilla is more prominent, taking the aroma into rich choc fudge territory, with the chilli just offering the mildest of tickles late on – the sort of heat even a kid could handle, if kids were allowed to drink imperial stouts.

It's into dessert territory we wade once more with Watchers On The Wall, a beer that aims to capture the other side of the Song of Ice and Fire. Tagged a White Chocolate Imperial White Ale, the upfront sensation is more butterscotch coated in white chocolate with the orange addition giving a hint of fruity hops and a touch of spice buried deep in its midst. The booze adds a sweetness and warmth in a beer that still manages to lean towards a dry finish – at least until you're part way down the can.

With both of a hearty nature and the former weighing in at 7.7 percent ABV, the latter at 9 on the dot, you could say they're a reminder that winter is, indeed, coming.