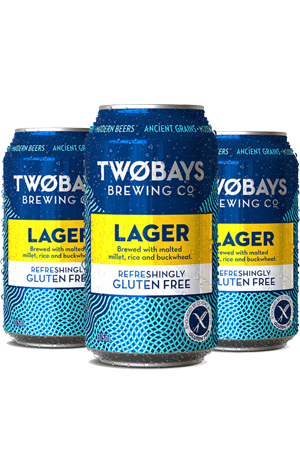 There's been growing interest in lagers in the craft beer world over the past few years – we took a look at their renaissance in this article and are featuring pale lagers in our second blind tasting of 2021. And now gluten free brewers TWØBAYS have added one to their core lineup.

In terms of specs, it's based around Pale and Vienna varieties of malted millet and lesser-seen European hops Saphir and Premiant. More importantly, however, how does it go as a lager? TWØBAYS have been doing a fine job creating gluten-free beers that can hold their heads high alongside their barley- and wheat-based peers, and I suspect lager-loving drinkers who can't consume gluten will find this very much to their liking too. Inspired by German pilsners, it does a good job of taking you to Northern Europe – at least in spirit.

Pouring a bright, gleaming gold, I picked up more of a spicy nature from the hops than the tangerine noted by the brewers, with those subtle, old school hops working with an impressively grainy, cracker like malt character. It's dry as and reasonably bitter too, as a German pils should be, and delivers a most lager like finish. A job well done.