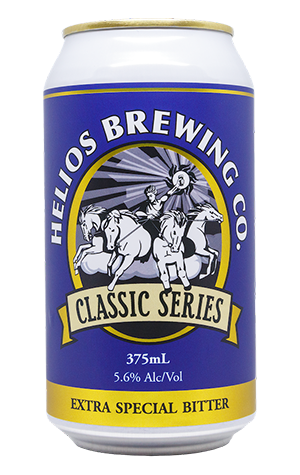 What’s the opposite of the marshmallow-custard-avocado-strawberry-cocktail beers of GABS? A traditional ESB would come close.

The second instalment in Helios’ Classic Series was released in May 2021 but this Extra Special Bitter is a play on a style that’s three or four hundred years old. Beers like what we now call ESBs have been around since the 17th and 18th centuries, when pale malts became available in to British brewers thanks to the use of a new kind of fuel that gave more control over the malting process.

Get your face above the big foamy head and breathe in the aroma of 10c toffees at the school fete in 1995, with the gentlest floral note in the background. The malt sweetness is subdued in the mouth, more dried dates than toffee, with a complex bitterness - the bitterness of dark brown toast with just a few burnt edges is dominant; the bitterness of mandarin peel is there for the finding; the bitterness of crushed walnuts comes in as the beer warms up.

This ESB isn’t completely traditional - head brewer Charlie Hodgson can tell you about the Supernova malt from Gladfield and the Mandarina Bavaria and Loral hops he used instead of ingredients sourced from England - but in a world where super hoppy beers with low bitterness have become ever so abundant, this malty and bitter entry is a lovely throwback to the good ol’ days of the 1700s that we all remember so fondly.