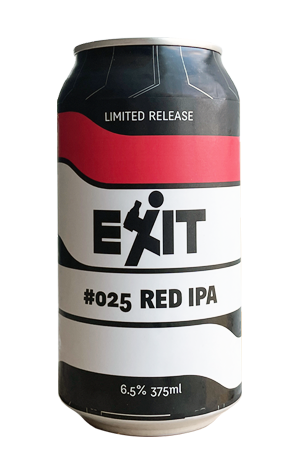 Exit's Red IPA has been bubbling away for a while – so long, in fact, that despite being #025 in their limited release series, it's hitting retail after #026. It was scheduled for release last spring 2020 before matters out of their hands forced them to push it back to autumn, which is a pretty sweet time for a RIPA to land anyway. We were lucky enough to pour the first keg at our GBW Opening Night Meet The Brewers session for Crafty Cabal members, and now it's out in cans too.

It pours with a lovely, bright, autumn leaves ruddy redness and pits as much rounded, toasted, dry and sweet grain-derived flavours into battle as it does the fruity, drying, bittering hops. There's some pillowy, perfumey fruits on the nose, with the specialty malts that provide the colour and toffee flavours doing their thing and enticing the predominantly citrusy hop combo of Centennial, Amarillo, Citra, Simcoe and Nelson Sauvin towards Berrytown. Like a bigger sibling to their award-winning Amber and just as enjoyable.

And other good retailers around Victoria