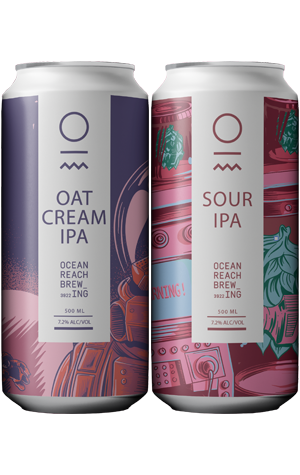 Ocean Reach's Artist Series kicks off with this pair of IPAs that stems from when head brewer Simon Bismire first met Joel Ebsworth back in 2019 at Cottonmouth Records in Sydney. It took until 2021 for the latter's art to appear on the former's beers, bringing, among other things, a penguin manning a spaceship to the party in a manner that reminds me of the incredible underwater episode of Bojack Horseman.

Oat Cream IPA comes double dry-hopped with Citra and Azacca, pale yellow and pretty darn hazy. Ripe fruit and curd like aromas and flavours dominate with a prickle of alcohol warmth on the palate, a meringue like malt sweetness, and a bitterness best described as gentle.

Its partner in crime is Sour IPA, based on the oat cream but with lactobacillus added to the mix. It's far less hazy and comes with a lifted, almost cider like tang from the bacteria. Indeed, there’s a sweet tang that reminds me of apple juice on the palate too – reminiscent, to an extent, of a mixed ferment, Belgian-inspired sour. Add in a pithiness running through its midst, adding a quenching acidity to the drying bitterness, and you've got a beer that's more sour than many a sour IPA I’ve had to date.