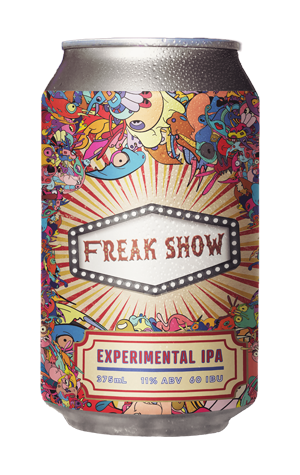 For GABS 2021, Prancing Pony brought their Freak Show to town – not just their steampunk-inspired stand and roaming performers, but a festival beer of the same name too. Officially tagged an "Experimental IPA", it's so heavy on the experimental it touches upon other styles too.

Now available in cans with labels I can only describe as what would happen if a balloon animal show got it on with Yellow Submarine under the direction of Rick and Morty, it possesses a barleywine like richness from the off before throwing some spiced baked goods and a dash of treacle and toffee-topped stewed bananas to the mix. With malt, warming booze and spices the key players here more than hop-derived aromas, flavours or bitterness, picture a hearty festive Belgian ale crossed with the aforementioned American barleywine and you'll have an idea where this Freak Show wants to take you.

It's out at the same time as their returning Schwartzbier, Miss Kitty, which we wrote about here, and a new Double Black Ale.