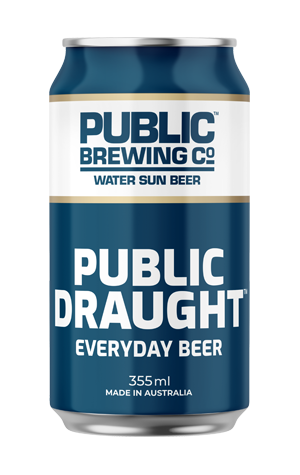 The Public Brewer ethos has always put locals and the local community at the heart of the operation. And while they've brewed beers in many styles over the years – smashed avo sour, anyone? – that means there's always been a desire to have simpler, more approachable styles, from pale ale to light beer, on the menu.

Public Draught slots into that part of their beer offering, inspired by classic pilsners from Europe but with plenty of Aussie character about it. Pouring a pretty clear golden colour, it's got a touch of those old school Aussie lager esters giving it a fruitiness but not in the modern hop driven sense. There's a sweetness that tilts towards the honeyed, and a low bitterness, making for a drink as workaday as the tagline "Everyday Beer" suggests.