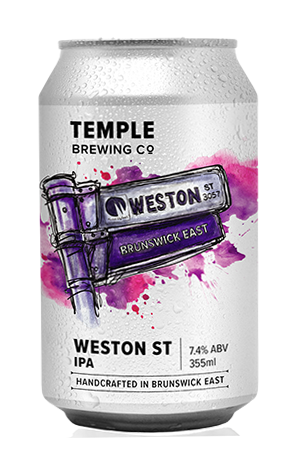 Temple’s Weston St IPA is a tribute to two things: the brewery’s home in Brunswick East and dank West Coast IPAs. First brewed as a limited release in 2019, it’s since joined the brewery’s core range and the beer's look pays further homage to the brewery’s locale.

Though classic in concept, the beer does make use of one more modern aspect of craft brewing in its use of Cryo hops over pellets, with a trio of Cascade, Simcoe and Chinook providing a punch of flavours for the crystal clear and orange beer. It's in those flavours that Weston St is a true classic, with a medley of smooth grapefruit, pine, resinous pine and a big bitterness all transporting you from Brunswick's most easterly point to America's west.