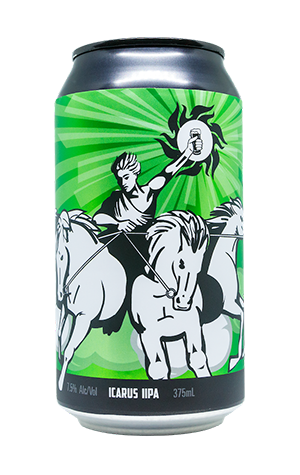 Helios head brewer Charlie Hodgson is his own biggest critic and is comfortable enough in his own boots to admit when something doesn’t go to plan. But this ‘didn’t go as intended’ IPA is a happy accident, and gave birth to Icarus IIPA.

From the first inhale, there’s sticky resin, ripe apricot and grapefruit flowing freely into the air. But keep at it and you may find yourself sticking your face into a big blooming pink rose - the subtle perfume kind, not the gooey Turkish Delight kind. A slight earthy dankness joins resinous pine on the tongue, alongside more apricot and pink grapefruit sprinkled with raw sugar - but without all the sweetness you might expect with that - it's more the flavour of sugar without all the sweetness of sugar? Sounds strange, I know, but that’s the best way I can describe it. Texturally, it’s thick in the mouth but finishes fairly dry with a harmonious bitterness.

While the 50/50 split between old school US hop variety Simcoe and new school variety Talus was always going to bring in this fine flurry of aromas and flavours, the boosted booze and dry finish give them a punchiness that might have been less at a lower ABV.

P.S. I’m usually among the first grumble with disagreement when a beer under eight percent ABV is called ‘imperial’. So for the purpose of this write-up, let’s say IIPA stands for Impressive IPA.

P.P.S. I really wanted to tie this write-up into Icarus’ namesake song by Bastille, but there was so much in the lyrics that didn’t fit. “You’ll drink yourself to death”? Depressing! “Drinking from a paper cup”? Never! The only line that seemed to have any relevance to this beer was “You feel it in your chest.”