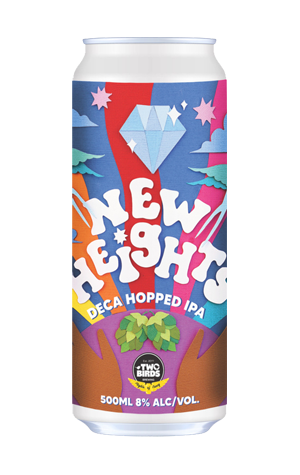 It's fair to say 2021 has been an eventful one for Two Birds. They started the year by joining the Fermentum family of businesses alongside the likes of Stone & Wood and Fixation, collected yet another trophy at the Australian International Beer Awards for their Lager in May, and now celebrate turning ten. Such an occasion deserves a beer, of course, and that beer is New Heights – on the surface another IPA to add to the hundreds already in circulation, but actually rather different to the rest once you scratch the surface.

They're calling it a "Deca-Hopped IPA" (not dodecahedron, as my brain keeps insisting) because it's been hopped at ten different moments in the brewing process with ten different types of hops, from Vic Secret flowers in the mash tun through to steam-distilled Centennial hop leaf oil in the transfer at the end, with pellets and various forms of extracts in between. If that sounds like a recipe for disaster / overkill, we've got good news for you: the result is a killer IPA.

For the "Make Beer Clear Again" brigade, its appearance will be like manna from heaven: it's as bright an IPA as I’ve seen in an age and as finely honed as that appearance suggests – without skimping on character. Aromas are of the fruit-bowl-in-a-blender variety yet delivered with purpose rather than a case of throwing everything at the wall and seeing what sticks. There's a touch of spice and a hint of that diesel-y character you sometimes get with Kiwi hops to taste, plus a well judged bitterness in a beer that's simply excellent and could hold its head high in any San Diego craft beer bar.