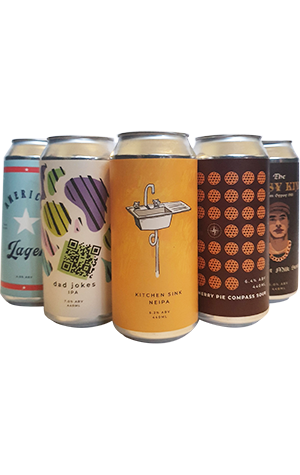 Well, they’re certainly keeping busy at Braeside Brewing, with the Melbourne brewery releasing an impressive five beers at once at the start of June 2021. They're a diverse enough mix of styles to make it hard to know the best way to work through them too but, almost certainly, the best place to start is with American Lager. The inspiration stems from Braeside’s head brewer Chip’s time living in America, where he fell for the amber and malt-driven lagers for which Brooklyn Brewery are particularly well known. It also makes it a fitting lager for winter, with the crystal clear amber beer having a fair bit of biscuit malt flavour while remaining crisp and light on the hop flavour with a soft herbal note blending well with the beer's bitterness.

There’s as much a sparkle and clarity to Dad Jokes too, which also draws inspiration from America, though in this case, it’s the bold IPAs of the West Coast. Though it's not as bitter as some of those, it is very much influenced by those same hop flavours – the hop blend from America's BSG named Sequoia is used along with Mosaic and Chinook to bring a smooth and oily array of grapefruit, candied orange and pine.

Back over to America’s east coast and we’ve got the Kitchen Sink NEIPA, which (fortunately) isn’t trying to win points for its own clarity, and where the name refers to the multiple malts and amount of hops used, plus the three phases of dry-hopping. The cloudy beer has a full body and is heavily hopped again with Sequoia along with Galaxy, Citra and Lemondrop to provide lashings of orange and fruit salad, including passionfruit, mango and pineapple, while there’s a more stone fruit note of nectarine in there too.

Rather than a bowl full of fruit, Cherry Pie Compass Sour is about one fruit and that’s the one in its name. It’s number five in Braeside’s Compass series and it’s very much a sour with winter on its mind, driven by biscuit notes from the malts, and in which the cherry purée is a little lighter and contributes a mouth-coating sour texture.

Finally, we have Gypsy King, a stout brewed with 12 kilos of coconut and which is otherwise quite true to the style. Probably the best way to sum up how the roasted notes, coffee flavours and chocolate all interact is to imagine eating a Lamington while drinking a coffee at the same time. In other words: enjoying one of life's great treats [Unless you can't stand desiccated coconut – Editor].