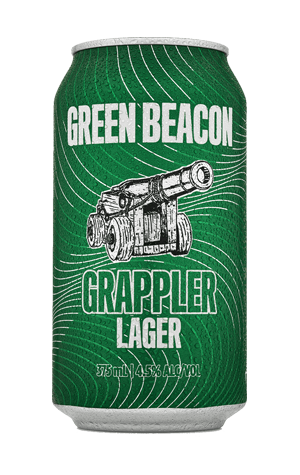 As with many Green Beacon seasonals, Grappler started out as an ever-evolving creature. Always some form of lager, one year it might be an New World pilsner, another an IPL. These days, while it's not totally settled – the brewers there are always refining their recipes – it is part of their core range and is a German influenced lager that head brewer Johann van der Welt says sits somewhere between a helles and a pilsner.

"I've wanted something with a little more hop character than a helles but with the same bready maltiness as a helles," he says. "In a nutshell, I see it as a 'hoppy' helles – 'hoppy' [in the sense of] what a traditional German lager brewer would call 'hoppy'."

So what does that mean of a beer for which production was moved to their brewpub to allow for longer lagering times? It pours very pale, with lemon-scented, floral hops alongside lightly sweet, delicate malt flavours. Indeed, it's a gentle affair all senses: a little floral, a little lemony, a little sweet, barely bitter – in other words, the sort you'd consume by the stein in a German beer garden.