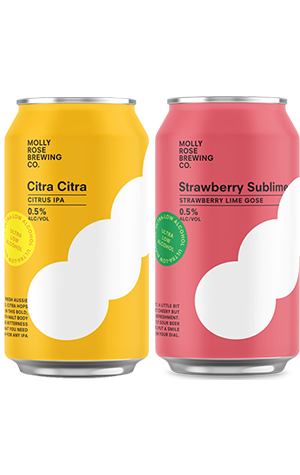 As much as alcohol-free beer seems to be on the ascent, in terms of breweries making two in time for Dry July, Molly Rose seems to stand out a little. For one, they're quite a bit smaller than many brewing companies that have made them and though they might be small in stature, they have a good reason for doing it. Brewery founder Nic Sandery has been trying them alongside the rest of us and as a father of a young child, values sleep over ABV and wanted to try his hand at brewing them. He's entered the category with two rather different approaches too but let's begin with Citra Citra, a 0.5 percent IPA made with both Citra hops and fresh oranges. The pale and slightly hazy beer is unsurprisingly very heavy on the citrus aroma and it's that flavour that's biggest when you taste it too, though there's also a light note of peach and pine too. There's a touch of biscuit that comes from the beer's body too and a slight sweetness that's not uncommon in beers in the AF end of the spectrum but with a substantial bitterness, the ultra low alcohol IPA still might well satisfy the craving for an IPA.

Though hoppy beers have been the approach many brewing companies have taken towards brewing alcohol-free, Strawberry Sublime sees Molly Rose go a little more in their own direction. That seems fitting considering how much Nic seems to love brewing with strawberries, including in one of Molly Rose's first releases, Sour Tom. Here the strawberry is joined by limes sources from Nic's parents' farm in the Northern Territory while sea salt was added to balance out those fruit notes too. Pouring with a vibrant pink hue that matches its can, the strawberry and lime gose is a little reminiscent of a fancy soft drink or mocktail with both the notes of lime and strawberry apparent as soon as you pour it into your glass. Both fruits work so well together you couldn't help but wonder if a garnish of mint would be the best way to bring the whole package together and though it might resemble a soft drink, the Strawberry Sublime's soft tartness brings it far closer to berry territory. Well, fruited sour territory anyway...

Save 15% At Molly Rose's Webstore