Beer Wolf Of The Willows & The Gospel Persistence II 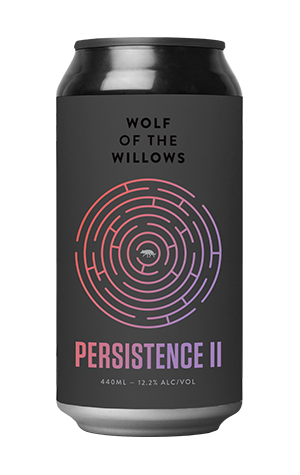 With Melbourne back in lockdown and Sydney facing the same fate until at least the end of July, many of us could use a bit of persistence right now. Fortunately, Wolf of the Willows have delivered some just in time, with their collaboration with The Gospel Distillery making its return as Persistence II. The beer was first released in November 2020, just as Melbourne was finishing up another lockdown and is part of the brewery’s wider Barrel Exchange Project, which has also featured releases made with Lark. The beer’s design was based around rye, which is also the base of The Gospel's whiskeys and the name refers to the grain's ability to growing in even the harshest of conditions.

The beer also managed to pick up a gold medal at the Australian International Beer Awards, so it's fair to say there's a bit to live up to with this release. Having spent six months in carefully chosen rye whiskey barrels once again, it’s safe to say, Persistence's return is a welcome one and it's once fulsome beast. It’s almost so fulsome it’s hard to pick it apart but there’s a silky and rich mix of vanilla, caramel, molasses and chocolate fudge, plus more fruit or spiced pepper notes and a touch of licorice. The weather is cold, the streets are empty but the beer is warming and Persistence is here to welcome.