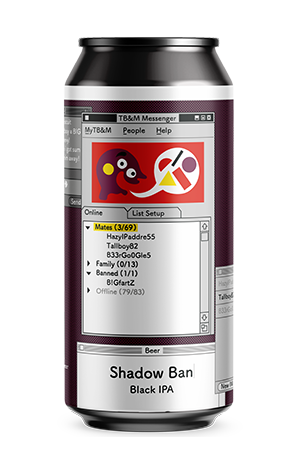 Tallboy and Moose brew a lot of different beer styles but one they say they’re particularly keen to see make a full return is the black IPA. To do their part in that revival, they’ve brewed Shadow Ban, with a label that looks like it's from another era too. There's a lot of detail to unpack with it but effectively their graphic designer has looked to an online chatroom circa the mid-2000s and provided swathes of messages to find.

As for the beer, it uses midnight wheat to provide the beer’s dark side and mostly that gives off roasted notes, with a slight bit of coffee, rather than anything too rich or chocolatey. Using a combination of Amarillo and Idaho 7, it packs a punch of citrus and a heavy hit of resinous pine for what’s a throwback black IPA that might also make you call for more of them, even if you’re unlikely to do it through AOL or MSM. Unless you enjoy screening into a void...