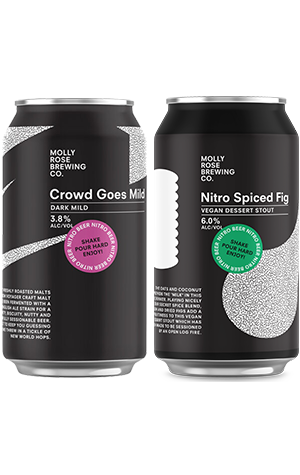 Melbourne's Molly Rose haven’t just been releasing alcohol-free beers in recent times, with owner Nic Sandery also putting tiny bubbles into cans with two nitro releases. Crowd Goes Mild has returned from 2020, when it was released (sans nitro) during another lockdown and became quite a popular beer among the wider Crafty Pint team. A dark mild might be the kind of traditional beer style you don’t often see from Melbourne breweries but this one’s a more non-traditional take on the British classic thanks to its inclusion of New World hops. It means that, while there are nutty notes, biscuity malts and a slight fruity touch from the ale yeast, there’s also a little citrus to add a bit of a punch to the creamy, fluffy beer.

Also impressively creamy is another vegan dessert stout from Nic: Nitro Spiced Fig. Rather than use the lactose commonly found in milk stouts, the beer instead relies on oat and coconut to further aid its silky side while there's also a slightly sweet note to the jet black beer with perfect white head too, meaning it looks awfully like Guinness in the glass. The inclusion of both fresh and dried figs, plus a spice blend provides the kind of flavours and make it rather reminiscent of a cake my nan used to make. I don’t think she would have been impressed with it being vegan, though…