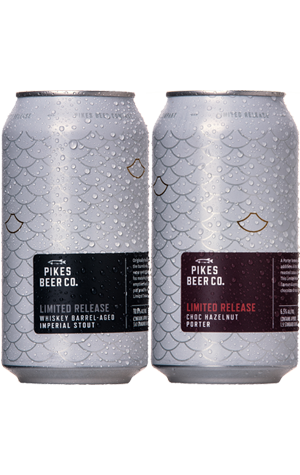 Pikes have crossed the beams of their beer and wine operations before, but this time things are a little different. In creating their second Whiskey Barrel-Aged Imperial Stout, ex-shiraz barrels were sent to Starward in Melbourne to create whisky, before being sent back to the Clare Valley and filled with a Russian imperial stout.

Now transferred to cans and, ultimately, the glasses of beer drinkers, it's a take on the style that showcases subtle barrel and liquor qualities, working in harmony with the underlying stout flavours rather than dominating. The whisky is present just enough that the dark roast, dusty cocoa, espresso coffee and dash of woody oak, come through too. Thick, rich, and with a decent bitterness from the dark malts, this jet black beer with a chocolate brown head possesses some alcohol warmth, with the whisky character asserting itself ever so slightly over time.

Their other dark beer release for winter first appeared at the 2018 GABS Festival, with the Choc Hazelnut Porter reappearing every winter since. Brewed with additions of hazelnut, cocoa nibs and roasted chocolate malt, it screams nuttiness – a 6.5 percent ABV porter that does everything it says it will on the label, with huge hazelnut characters supported by silky chocolate.

It really is hard to move past the hazelnut: it’s everywhere in both the aroma and flavour, with the liquid chocolate and a little milky sweetness gentler companions. The body is on the lighter side – more nutty chocolate milkshake than thick shake – as is the sweetness, which carried through all the way to the end, as you might expect of a beer laden with such adjuncts.