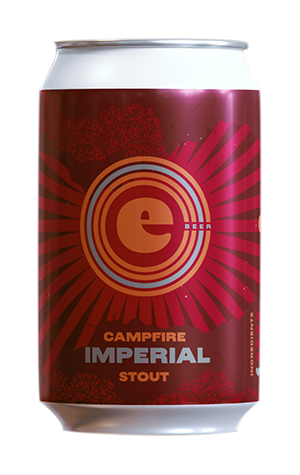 Camping might be off the agenda for many of us at the moment but Exit Brewing have looked to bring the campfire into the home (metaphorically at least - this is not something you ever want a brewer to actually do) with their 2021 winter seasonal, Imperial Campfire Stout. It’s #027 in their long-running lineup of limited releases and draws on Exit's love for dark beers - which has picked them up plenty of glory at the nation's beer awards - and is also inspired by head brewer Grum's early days homebrewing. Back before he and Frase started Exit in Australia, Grum was busy homebrewing in Ireland and loved trialling out and using smoked and peated malts in his beers and it seems his memories from those days remain fresh.

With the beer containing a varied malt bill of Ale, Light Chocolate, Dark Crystal, Manuka Smoked, Roasted Barley, Oats and just one percent Peat Smoked malt, it's an impressively balanced and nuanced beer for a 10 percent ABV stout. Campfire is certainly an accurate description too, with the first flavours being a swelling mix of charcoal and a smoked meat which the brewery calls bacon but brought to my mind long days in a backyard sitting by a smoker that's been filled with multiple different animals. Those peated characters give way quickly though to elements that make the beer closer to a classic imperial stout, with a more roasted touch of coffee and aniseed, dried figs and dark chocolate plus a slight edge of pine and earth notes from the Chinook and Simcoe hops.