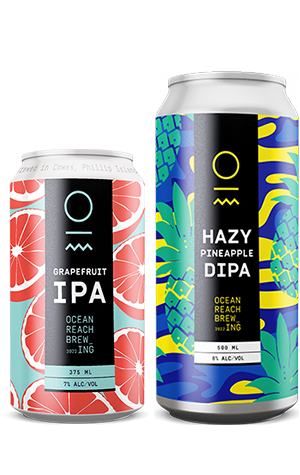 For August 2021, Phillip Island’s Ocean Reach Brewing have been combining fruit with hops that tend to conjure sensations with a close association to fruit, which, as I write these words, has my mind wandering to this classic Simpsons clip. Grapefruit IPA is a returning seasonal and combines fresh ruby grapefruit with America’s Amarillo, Azacca and Citra hops for a pithy punch that’s heavy on the grapefruit but also provides a broader coalition of citrus in the shape of orange and tangerine. Add in the beer’s golden yellow body, a touch of resin and sharp bitterness and you’ve got an IPA bringing West Coast vibes.

The brewery have also answered the question of how to best boost their Hazy Pineapple IPA, with the answer being double the hops and raise the level of booze from 6 percent ABV to 8. Hazy Pineapple DIPA is a pale yellow beer that pretty much replicates pineapple juice through its appearance and, on cracking it, there’s an immediate waft of canned pineapple and that continues as you drink, with a softly sprightly edge bringing it closer to juice territory. That said, even with that one tropical fruit at the forefront, the DIPA isn't a one-trick pony, also serving up mango and rockmelon against a lush backdrop.