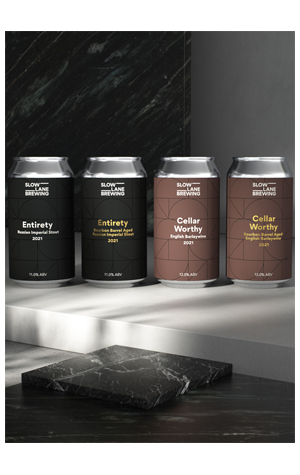 Indulge me, if you will, in a little peak behind the curtain into the glamorous and fast-paced life of the C tier [When did you move up, Judd? – Editor], part-time beer writer...

You receive an email from one of the handful of breweries that routinely send you new beers to write about letting you know a package is on the way. This is great news, of course, but is tempered by the revelation that the four beers contain more than 13 standard drinks and, ideally, you’d like to write them up ASAP after receipt. It’s a rough and tumble job at times and, truly, that’s why only the bravest souls take it on.

And thus, we have this foursome of new Slow Lane releases: Entirety, a Russian imperial stout, Cellar Worthy, an English barleywine, and then bourbon barrel-aged versions of both.

Stout porter was being produced by many breweries in London during the mid to late 18th century but the first to obtain the imperial seal of the Russian Court was the beer originally brewed by Henry Thrale’s Anchor Brewery ,which was later purchased by Barclay Perkins. Allegedly, the Barclay Perkins Imperial Brown Stout was brewed to be stronger and more bitter to survive the journey to St Petersburg (feels like we’ve heard that story about a beer style before). In any event, until the invention of black malt in 1817, Russian imperial stout would have been, at best, a dark brown, unlike the RIS we know and love today.

At the very least, Entirety looks like it could survive a perilous ocean journey. Shit, it looks like it could fuel the bloody engines. Aromas of dark Muscovado sugar and black coffee ooze from the glass. The roast and bitterness are somewhat subdued here compared to many other RISes but the dark malt flavours are a joy. It’s like a coffee and dark chocolate brownie with a side of raisin toast. This is cut through with a clean bitterness and only the slightest alcohol warmth. A more refined and drinkable 11 percent ABV beer seems doubtful.

Although it’s not the exact same beer (there’s a slight difference in the grist and brewing method), Slow Lane have taken their Entirety RIS and aged it for eight months in Heavens Hill whiskey barrels. I tasted both beers at the same time and was surprised at the disparity between them. Obviously, there’s the expected bourbon flavours and aromas, but there’s a more rounded caramel sweetness too. It genuinely reminded me of a Macca's caramel sundae at times along with a hint of smoke and a warming finish.

For the 2020 release of Cellar Worthy, I mentioned how, instead of using crystal and other specialty malts, Slow Lane opted for a super long boil time to produce the Maillard reaction needed to create the same kind of compounds. Essentially, boiling a sugary liquid for a very long time is going to create the same kind of complex unfermentable sugars and other compounds that are produced by kilning malted barley into crystal malt.

Well, this time around, for all four of these beers, head brewer Alex Jarman boiled the wort for a minimum of five hours, going so far as eight in the case of the bourbon barrel-aged barleywine. I’m not experienced or skilled enough to say whether or not either method produces better beers, but it is a wonder to experience such an intense caramelised character from beers made with mostly pale Maris Otter malt.

Cellar Worthy 2021 pours with low carbonation and is coloured like an old leather belt. This is an absolute riot of concentrated sugary aromas and flavours. Golden syrup, toffee and bran cereal on the nose, and sweet sultanas and all spice on the palate. At 12 percent ABV, it’s a sipper for sure, but it’s warm, smooth and comforting.

Again, like the two RIS, there are very slight differences in ingredients and method between the straight up and barrel-aged barleywines, and the resulting beers are stark in their differences. For a start this is a much deeper brown – more than tan with a higher carbonation and longer lasting head. Perhaps the most remarkable aspect of this beer is how the whiskey, oak and sugars combine to create something that is so like a nice tawny Port with highlights of coconut, date and vanilla. Barrel-aged Cellar Worthy is akin to giving your grandma a cuddle after Christmas dinner. She’s reeking of fruitcake and port and, by God, it’s lovely. [I take it back. You're at least a B tier writer to me – Editor]