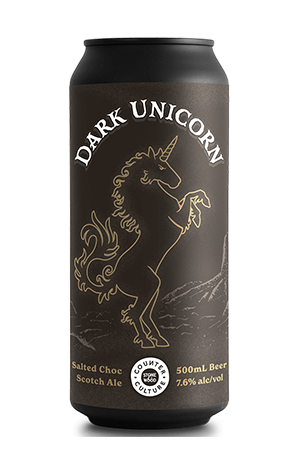 Stone & Wood’s Counter Culture beers have included no shortage of very sweet items since launching – well, what do you expect when you turn French toast into a liquid – so it would be easy to assume the 13th in the limited release series would be among the sweetest. After all, when you call a beer Dark Unicorn and label it a Salted Choc Scotch Ale, it does all feel a bit like a special ice cream flavour more than a beer. Instead, what we have is a beer that's one of the closest, well, beer beers to feature in the series in a while.

The dark copper affair is really a classic Scotch ale that brings a chewy malt base, caramel and some soft, yeast-driven fruity notes to conjure a tavern in the Scottish Highlands. It’s effectively only on the second sip that those elements are joined by the other flavours, with some whisky present thanks to the beer being aged in Starward Whisky barrels, then an even lighter lashing of chocolate. Of those additional flavours, it’s the salt that’s really most prominent and it has the impact of combating any sweetness even further, thus making Dark Unicorn an impressively drinkable 7.6 percent ABV.

As for the name, well, that refers to a symbol in Scotland's Highlands: the Dark Unicorn represents power and passion and is said to arrive to deliver strength to those struggling the coldest and darkest days. We could certainly all use one of those right now.