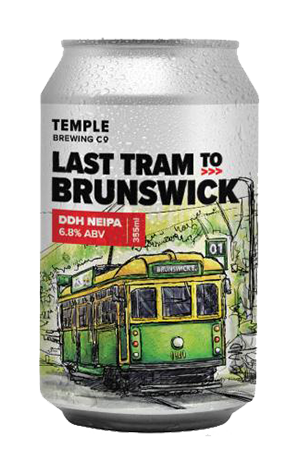 They’ve been making up for lost time at Temple. Their first hazy IPA to appear in tins arrived as recently as early 2020 – the aptly named Last Train To Boston – but the Brunswick East brewery soon followed that with a four-part Hazy IPA series released across six months.

Now, in 2021, they’ve brewed a sibling to that original hazy; a DDH NEIPA by the name of Last Tram To Brunswick. In some ways, the brewers have done a disservice to tram lovers everywhere as the label image features an illustration of the historic W-Class Tram, rather than the Z-Class tram in which you’d typically enjoy the slow ride up Lygon Street. Having said that, given the illustrative nature of the label, Temple may well have been going for an historic approach to the beer rather than trying to capture the reality of Melbourne’s modern tram network. Even more likely still is the fact that people buying the hoppy, hazy beer might care more about what’s inside the can more than the intricacies of a city’s tram network. Well, you’ve come to the wrong place and in this essay, I will argue...

...actually, let’s leave it there as Temple certainly haven’t done a disservice hop fans by using heavy doses of LUPOMAX Eldorado and Galaxy hops in the whirlpool and dry-hopping with LUPOMAX El Dorado, LUPOMAX Amarillo, and Galaxy. Having spent some time trialling different approaches to brewing with heavy doses, Temple show they know how to combine hops to create a juice bomb – you're hit by huge and immediate tropical juice aromas and, as it goes down, they're joined by mango, pineapple, nectarine, grapefruit and a distinct note of apricot. Partner that with the beer's soft, seriously thick mouthfeel and you have a very modern IPA lying inside that historic tram.