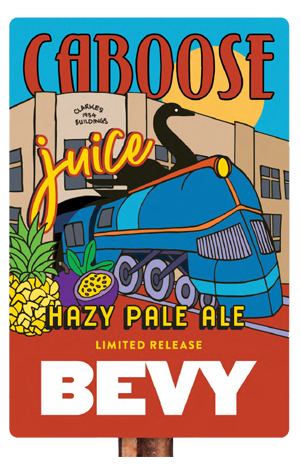 One pub door closes, and another opens – in this case literally in the same spot. Last year’s closure of Perth institution, The Flying Scotsman, offered the opportunity for the Clarke’s Building's southern tenant to go full pupa, ready to reveal itself as The Elford – a now-gleaming version of a once charming boozer atop Beaufort Street in Mt Lawley.

It’s new publicans previously partnered with Lion’s Bevy Brewing at The Camfield, a joint venture that brings us to Caboose Juice, a hazy homage to the crafty bar that was part of the building's previous life. Here, instead of dank, the limited release hazy pale is awash with tropi-citrus personality – there's just a hint of pine on a smooth, welcoming palate, which creeps just over 5 percent ABV.

It’s the kind of beer that suits assessing the edifice in new clothes and a new career, with fond, hazy memories of what came before.