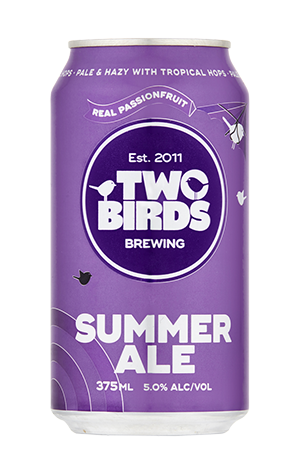 In Australian craft beer circles, passionfruit surely has to be one of the most important fruits. Helped in no part by the success of Stone & Wood's Pacific Ale and the Australian-born Galaxy, hop-derived passionfruit characteristics have, it's fair to say, become rather popular in beer. Then there’s the long list of kettle sours that use passionfruit juice or purée to great warm weather and allow the fruit's tarter side to marry well the style's sourness. Ahead of summer 2017, Two Birds in a way brought those two approaches together by launching Passion Victim; a beer that combined the Galaxy hops that make Pacific Ale what it is with a couple of citrusy, fruit salady US hops (Mosaic and Amarillo) and, just to be sure contained actual passionfruit too.

That purple-hued can have since made the move into the brewery’s core range to become Summer Ale. Losing the name hasn’t lost the beer any of its passionfruit flavour though, with that being the first note that hits, though it’s soon followed by some lemon and a touch of melon. It’s lighter on the palate than you might expect a 5 percent ABV beer to be which in essence, makes it quite summery.