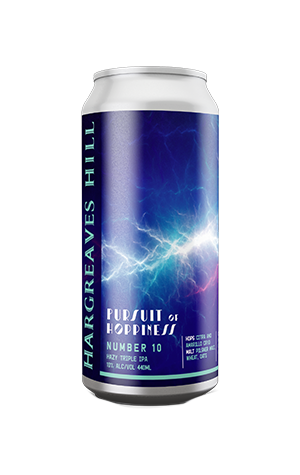 Brewing ten beers in one series dedicated to hops is certainly a way to learn a lot about how to best utilise the little green marvels and, for Hargreaves Hill, it seems the brewers have been putting those lessons to good use. The Pursuit of Hoppiness series has been an exploration of non-stop hops (and lots of them) with each can containing substantial details of how and when the hops were added; and for No.10 we’ve arrived at the biggest yet. The brewery’s calling it a culmination of all those hoppy learnings, with the triple hazy IPA including a total dry-hopping rate of 30 grams per litre of beer of Citra and Amarillo Cryo.

Given the amount of hops and booze at play, it's an unsurprisingly lush and thick beer, pouring quite close to orange juice in the glass. When it comes to both aroma and taste, it's orange juice and some grapefruit leading the charge too, soon joined by mango, pineapple and a little gooseberry. For a hoppy beer in the double digits with a bolt of lightning on the can, you may well expect the booze to hit hard and send a shock down your throat but, instead, No.10 hides that to the extent you could easily assume it’s a much smaller beer.