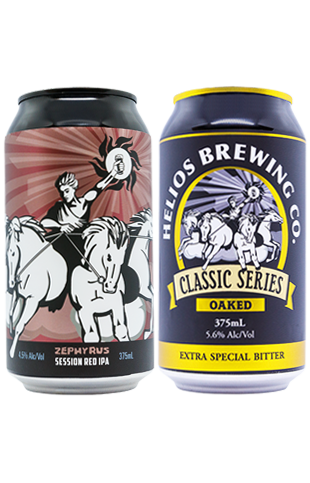 It’s not often I get introduced to a new concept from Greek mythology, but Zephyrus I didn’t know. Apparently he’s the god of the west wind, and the messenger of spring. Since Zephyrus Session Red IPA is out in cans just as spring has sprung, it’s a fitting namesake.

When I heard "session red IPA", I expected a zippy little thing, like the winged Zephyrus would be a red finch flitting about on the wind. Instead I got a falcon, gliding in slowly, its reddish brown feathers carrying a creature more majestic than showy. The fruit in the aroma whooshes away as pine settles in for the landing, kicking up the dust of bitter toasted malt. Solid flavour with a sessionable ABV.

Earlier in 2021, Helios released an Extra Special Bitter as part of their Classic Series. But the brewery withheld a limited volume, let it rest on French oak for several months, and has now released it as Oaked ESB. You can read what we said about the original beer here… but what’s changed?

For starters, the biscuity and toffee aromas from the Gladfield malts have been joined by a slight winey funk, like you might experience with a gentle barrelled sour. The already subtle citrus and floral hop notes have receded even further into the background, but lend a slight sherbety character to the tartness on the nose. In the mouth, soft malt sweetness blends with a savoury earthiness from the oak, and the light body carries the familiar nutty bitterness of the original. This ESB is now a collaboration between the careful work the brewers and the hand nature played in the evolution of this beer.