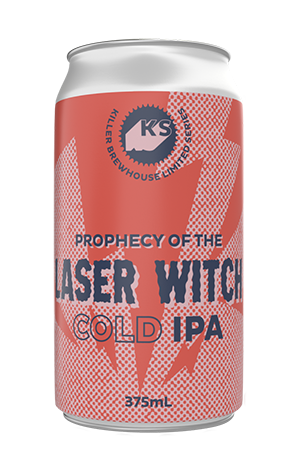 Progressive metal, space rock, heavy metal. They're all worlds of music that I struggle to understand. It’s not that I’d even say I don’t like them, I just don’t know them, what they’re about, or where to begin. A good place to turn, though, would be Killer Sprocket, who do indeed know their metal music.

It's why they've given their cold IPA – for details of the nascent style, you can head here – the name Prophecy of the Laser Witch, in reference to a song on Brendon Small's Galaktikon; an album which straddles those genres of metal mentioned above. Killer Sprocket's Sean Ryan also knows what hops he likes, and often it’s the classic Americans, with this beer containing Cascade, Centennial and Chinook.

It makes for an IPA that hits with a lot of resinous pine and grapefruit rind which, along with a floral touch, makes it veer towards the world of marmalade. It finishes with a really quite substantial bitterness too, which means it's not too removed from a classic West Coast, although with such a lean body and crisp finish, Laser Witch stands apart from such beers.

Maybe you could say it's more nu-metal more heavy metal? Does that reference even make any sense? I have no idea, I'm just googling things. I’d like to know, though.