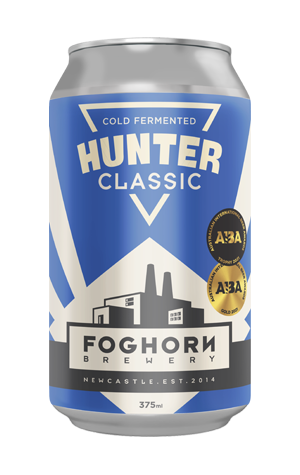 Among the swag of medals FogHorn picked up at the 2021 Australian International Beer Awards, the Newcastle-based brewery’s Hunter Kölsch stood tall, judged the Best British or European style ale. Although unfamiliar to most, locals in the Hunter have been blessed with this golden nectar for nigh on two decades, albeit under a different guise.

In August 2020, the brewery formerly known as the Hunter Beer Co became the Hunter outpost of FogHorn after the latter's part-owner Mighty Crafty acquired the brewery and venue in Nulkaba. Despite the ownership change, experienced brewer Keith Grice stayed on, and so did many of his finely honed recipes, including his flagship Kölsch. With all that being said, it brings us to Hunter Classic, the the longstanding favourite and trophy winner by another name.

Kölsch is one of the more idiosyncratic German beer styles. While the country is known as the global heartland of lager, the brewers of Cologne decided to stick with ale yeast. Sure, they brewed with pale malt and noble hops, fermented it cold and lagered the finished beer for a month or so, but it’s an ale, dammit! Basically, you’ve got yourself a clean, crisp lager with just a bit of ale fruitiness to keep things interesting.

And Hunter Classic is exactly thus. Clear as crystal and sparkling gold, it starts with a delicate grainy aroma with just a hint of apple and pear fruitiness. Upfront on the palate is a salt cracker sandwich: smooth, bready malts married with crisp crackers finishing up with a dry minerality. With a mild noble hop bitterness, 4.5 percent ABV and a refreshingly dry finish, it’s absolutely no surprise this beer has been 20 years in the making.

Perfectly honed and masterfully brewed, Classic is the kind of beer you’d want available to you wherever you go.