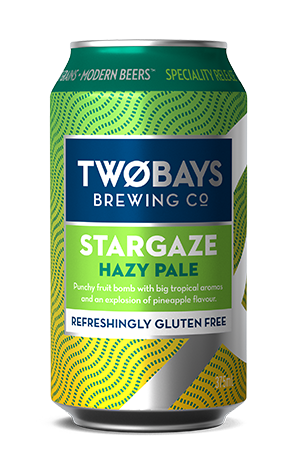 Having been diagnosed as a coeliac in 2015, one beer trend that Richard Jeffares has largely been missing out on is hazy beers. Fortunately, when you own a brewery dedicated to creating gluten-free craft beer, you’re in a position to solve such issues. Having brewed a few larger hazies for their taproom, in spring 2021, TWØBAYS wanted to send GF haze and tropical hops a little further by canning Stargaze Hazy Pale.

It's dry-hopped with Mosaic, Strata and Ekuanot, a trio of hops which provides a mass of passionfruit flavour along with a medley of pineapple, mango and a touch of citrus. Although it’s slightly more bitter than some hazy beers, as with a lot of TWØBAYS releases, Stargaze is one that fits so well into its style that, more than likely, you'd need to be told it's a gluten-free beer.