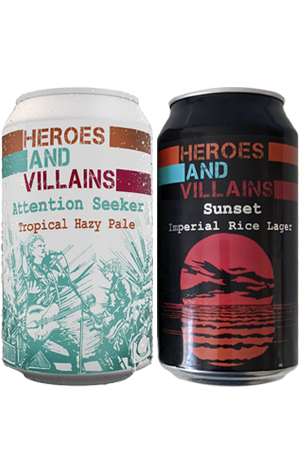 Ten, free flowing minutes north of the Perth CBD, Heroes and Villains have released a pair in which one dons a hero's cape, while the other takes the form of a villain. Our attention-seeking hero, clad in white, pours appropriately with a fine, moussey head. Sabro and El Dorado join forces in a citrus, pineapple and coconut *Attention Seeker**, which features a pithy closing bitterness.

The villainously noir-wrapped Sunset streams blood red, thanks to the use of beetroot and char siu Asian colouring additions. The haiku-featuring imperial rice lager is a collab with Perth beerstagramer Brendan Fernandez that looks to the recent Olympics and pending summer sunsets for inspiration. Their combined efforts deliver craisin, raspberry and pilsner malt on the nose, which in turn meet earthy hints, and deceptive drinkability in the glass – perhaps the it’s most evildoing work here.

And WA Heroes and Villains stockists