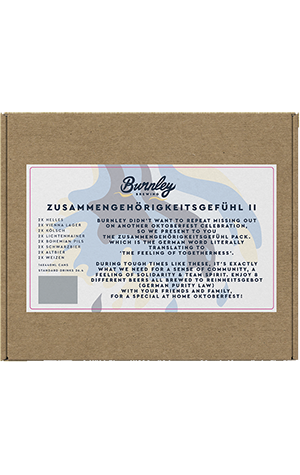 If one Zusammengehörigkeitsgefühl wasn’t enough, how about a second box of more Zusammengehörigkeitsgefühlness? If you’re reading this wondering what’s going on, it’s probably best to start here and then come back to learn that a couple of weeks on from that first Oktoberfest box, Burnley has released a second that's also filled with 16 beers. Once again it’s a box that refers to the “feeling of togetherness” and contains the brewery’s core range Helles and Vienna lagers but aside from those two, there's an entirely new collection of beers inside.

Open one up and you'll find the Kölsch, the German ale that’s fermented cold and famously best enjoyed near Cologne’s impressive cathedral. In Burnley’s pack, it’s unsurprisingly one that’s very traditional, being an incredibly clean and dry beer, with some soft floral notes and quite a substantial bitterness. If you were to travel north from Cologne you’d find Dusseldorf; a city that also sits on River Rhine but has a rivalry with their southern neighbour and is known for an entirely different beer, the altbier. Again a top-fermented beer, Burnley’s Altbier presents almost like a classic English dark mild with a copper to brown colour, quite prominent fruit notes from the yeast and a strong biscuit and nutty finish.

Then there’s Bohemian Pilsner which, since it’s styled on the classic Pilsner Urquell from Pilsen in the Czech Republic, does seem like cheating in some ways. Though, given the fact that the man behind that beer, Josef Groll, was himself Bavarian and the lightly spiced but substantially bitter, sparkling golden beer would go down quite well in the German sun, perhaps such deception can be forgiven. Next up is a favourite of Burnley head brewer Micheal’s to both drink and brew - Weizen. Made with 50 percent wheat malt as required by German beer law, it hits all those notes might expect with it being highly effervescent, containing a thick mouthfeel and filled with notes of banana and loves.

Representing the darkest corner of the pack is Schwarzbier, the black lager which could almost be a stout with its roasted and chocolatey notes, though with quite a crisp finish fits more snugly into the world of lagers. Finally, that brings us to the most unusual of all, the Lichtenhainer, a smokey and sour beer from around the city of Jena. Though it might be a style we rarely see, it's a beer that looks a lot like beers we do see a lot of being a pale and hazy yellow colour and even containing a juiciness on its sour side, while the beer's smoked side brings to mind bacon enjoyed over breakfast with that glass of tart orange juice.

If you're looking to get your hands on the second Zusammengehörigkeitsgefühl, there's just a handful still available from Burnley brewing, while independent retailers across Melbourne also have both the packs and the beers within.

NB If you're a member of our beer club, The Crafty Cabal, and are reading this before October 14, you can enter a competition to win one of three packs.

Style
Various - but all brewed to the Reinheitsgebot
ABV
Various