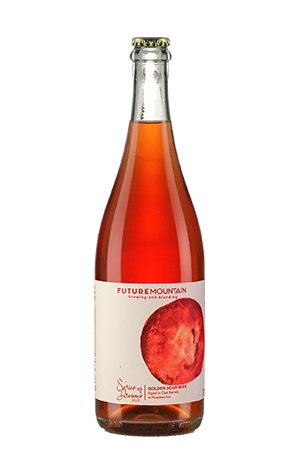 When Bob Dylan’s Series of Dreams was first recorded in 1989, it wouldn’t be for another two years that fans had a chance to hear it and by then, it was a slightly changed version that made it onto 1991’s The Bootleg Series. But, they say patience is a virtue and like the track, Future Mountain’s Series of Dreams has taken time to arrive (as do many of their beers) and started life a little removed from where it’s ended up. Series of Dreams 2021 started out as a golden ale before raspberries from the Chapman's farm were added, with the Melbourne brewery sourcing those berries from that Yarra Valley farm each year, with us having last written about the beer in 2019.

The resulting beer is one that hits with fresh raspberry flavours and a slightly more rich, jammy note. But it's not just raspberries at play, with the base golden sour adding a more complex web of fruit flavours that lean towards cranberry and stonefruit while the beer's acidity is clean and provides a refreshing acidity that makes it a welcome springtime release.