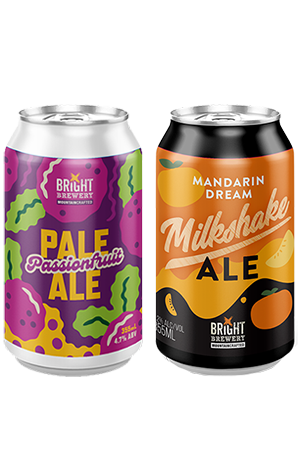 They’ve been charging ahead with fruit at Bright Brewery, with two punchy releases making their way out of the High Country. Passionfruit Pale Ale doesn’t just have juice providing the refreshment but also Eclipse, Galaxy and Azacca hops to add zesty mandarin and some light pine to the huge hit of passionfruit. It means, it’s probably best to think of the beer as a Pacific-style ale with those fruited notes turned up though with none of the sessionability lost.

Mandarin Dream follows on from the brewery’s Pinneaple Dream that was released in February 2021, which unfortunately looked a little more like a nightmare when it had to be recalled due to some cans experiencing secondary fermentation. Such an experience hasn’t stopped Bright from pushing the limits of beer though, with the brewery cutting up and juicing more than 400kg of mandarin to load them into a milkshake ale that’s a bit of a dessert but still not too far from being a more regular hoppy beer. At the start of proceedings, there's quite a complimentary blend of mandarin and cream which, along with a building sweetness, made this Dream come across like a mandarin lolly. But there's also an intense perfumey note in there too and with a wider mix of citrus flavours and substantial bitterness, it's brought a little close to being a highly-hopped IPA.