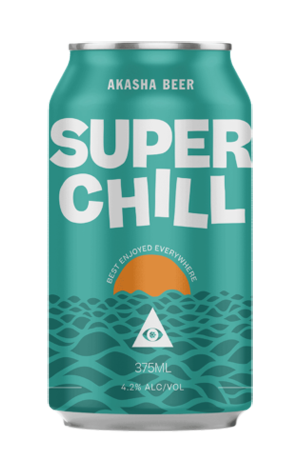 You know what this is. Have a look at the aqua green seascape and golden sun on the can, look at the name, look at the ABV, look at who brewed it and pour it into the glass of your ample imagination. Is your Akasha Super Chill hazy? Tropical? Refreshing? Sessionable? Congratulations! You’ve bloody well nailed it.

Released mere days after their home city tentatively emerged from a gruelling lockdown, Akasha have cooked up an absolute warm weather classic here. For many Sydneysiders in particular, the prospect of a couple of beers in the park has become more of a thing than ever. And in Super Chill Akasha have just about distilled a park beer into its most ideal form.

For Super Chill, the brewing team has once again relied on a couple of their favourite hops to steer the ship. Although much lighter than most of their usual fare, there’s been no skimping on the dry hop front. A tried and true combination of Mosaic and Galaxy provides passionfruit, mandarin, pineapple and mango in abundance over a soft and razor thin malt body. The bitterness is light but not vanishingly so. There’s still the faint undercurrent of piney resin to keep the beer in balance and the finish clean.

It might have been a rainy 15 degrees when I drank this beer, but I could’ve sworn I could feel the sunstroke and early bedtime coming on.